Andrée and Luke joined us in French Polynesia to share the beauty of sailing in Tahiti and the Society Islands with us on Galatea. We initially anchored off of Maeva Beach ('Welcome' in Tahitian) and snorkeled around the reefs next to the boat. We then moved to Papeete to enjoy the excitement of the town and provision for our ~200 nm journey through the islands of Moorea, Huahine, and Bora Bora - one more beautiful than the other. It was wonderful to spend such quality time with Andrée (Dava's cousin) and Luke who took time out from their busy lives in Portland, Oregon where Andrée is a school counselor at Thomas Edison High School and Luke schedules and manages airplane charters. After visiting Papeete, our time together in Paradise started with a beautiful day sail to Cook's Bay, Moorea, and we made landfall just before the sun set over the breathtaking spires. We left Moorea just before sunset and sailed overnight to Huahine island to land in a beautiful torquoise anchorage off of the old Bali Hai hotel. Now experienced sailors, Luke and Andrée were familiar with life onboard Galatea. Luke caught a Bonito Tuna and Gui cooked it on the grill. Life doesn't get much better than that! From Huahine we set sail at dawn to arrive in the afternoon in Bora Bora and picked up a mooring at the Bora Bora Yacht Club. 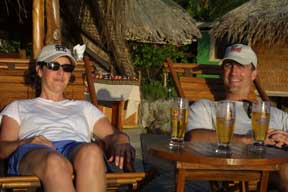 Bofore: Enroute from Tahiti to Moorea on Galatea. The first day of sailing after living in Portland, OR. After: Relaxed, tanned, and enjoying sunset at the Bora Bora Yacht Club.

Jean-Pierre joined us in Panama for a few days of working on the boat and final preparations for our passage to the Galapagos. After fixing the boom connection to the mast and stocking up for our next few months at sea we set sail for Galapagos on March 26, 2002.

Jim and Jim joined us in the wild town of Colon, Panama on the Caribbean side to help us cross the famous Canal. After several days of paperwork, more paperwork, and paperwork, provisioning, and outfitting Galatea with a bumper guard skirt of tires for protection during the Panama Canal Crossing, we finally got the go ahead call on March 15, 2002 to start at 8 am. After our first day in the canal we anchored at Lake Gatun (the largest human-made lake in the world), but there was no swimming in the fresh water because the waters are infested with alligators. After a night of star watching and laughing all night at the stories of their wild and interesting: Jim Rabby (a painter from Santa Fe, NM) and Jim Olive (a photographer from Houston, TX) we were ready for a second day in the canal. We started around 10 am and passed through two sets of locks to sail under the 'Bridge of the Americas' into the Pacific Ocean by 3 pm. Since they had already postpone their trip back to the States, there was only 1 night to do Panama City. We had a great tour around the city and an Argentine parrillada at Martin Fierro. The next morning at 5 am Jim and Jim hopped in a cab to photograph Panama City at dawn before flying back to Houston. 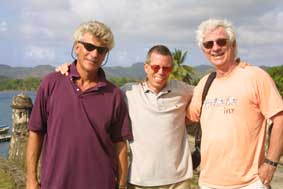 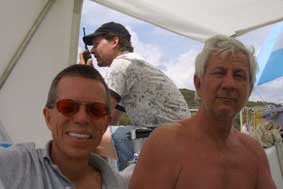 Gui with Jim Rabby and Jim Olive in the historic town of Portobelo, Panama. Jim and Jim onboard crossing the Panama Canal with our Panama Canal pilot 'Pat' in the background.

We had three fellow travelers join us for the Panama Canal crossing to assist with the line handling (four ropes 150 ft long). Mike, from Alaska, was traveling all throughout the Americas; Stephan from Quebec, Canada was bicycling from Canada enroute to Patagonia; and Glen, from England, was traveling on land throughout Central America. They were all a great help and fun to have onboard Galatea with an evening spent signing to Mike's guitar playing in Lake Gatun. 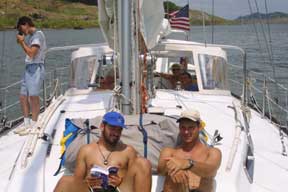 Counterclockwise: Pat, our Panama pilot, Stephan and Mike on the bow, Glen and Gui and Jim in the cockpit.

The MIT gang joined us in Curaçao for a Space Biomedical Engineering Workshop. Some of the most ingenious ideas are thought of in the most beautiful environments. 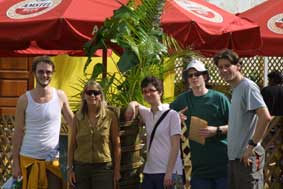 Tato joined us in St. Martin and sailed to St. Barts, Antigua, and Guadeloupe. His spirit brightened up Galatea and he kept us laughing. We also met his great friends Patrick and Evelyn in Guadeluope (See "stories from our jouney"). Thank you for a great visit and all of the assistance in "French" on Guadeloupe to get our regulator and engine back up and running. 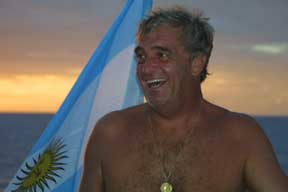 Pedro Vasena, Gui's cousin from Buenos Aires, Argentina and daughter, Cecilia, joined us in the British Virgin Islands and sailed with us to Sint Maarten/St. Martin in the Dutch/French West Indies. St. Martin is the smallest islands run by two governments in the world and the Dutch and French seem to do it right. It's a beautiful, friendly island with great food as you might imagine. Pedro and Ceci enjoyed day sailing in Tortola, St. Peter's, Ginger Island, and Virgin Gorda, British Virgin Islands before crossing to St. Martin. The 27 hour, 80+ nm sail, was a beat the entire way with 2-3 m seas due to a High Pressure system over the Leeward Islands (NE Caribbean). Pedro and Ceci are great crew and even saw some excitement as the sail locker totally filled in the heavy seas and Gui and Pedro went 'scuba diving' onboard Galatea to stop the leak (more like a shower) coming into our foreward head. 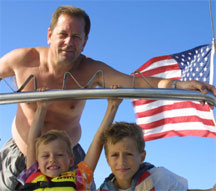 Dougie Thomson and sons Jamie and Kyle sailed with us through the British Virgin Islands (BVI). Dougie has had a home on Tortola for the past 20 years and showed us his favorite spots in the BVI (Cane Garden Bay, St. Peter's, Manchineel Bay, etc. - not to mention the Bomba Full Moon Tea Party!) Hosted by Gracie, Dougie and Emma Thomson, we had a wonderful New Years Eve and welcomed 2002 in style. Thanks! 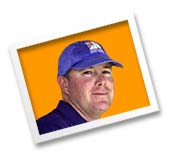 Crew Member: Bryan Peugh
Bryan Peugh is the Executive Director of the Courageous Sailing Center in Boston. He will be joining the Galatea crew for the Boston to Bermuda to San Juan, Puerto Rico legs of the journey. At Courageous, Bryan is responsible for creating and implementing strategies and tactics to effectively communicate the Courageous message to improve the quality of urban youth programs. Bryan has launched the highly successful Courageous Challenge Corporate Regatta and Make a Mark Gala Charity Event along with other significant achievements. Bryan created the Junior Rhodes 19 National Championships, where chiledren from across the US compete in a bona fide one design regatta - free of charge! Previously, Bryan has held management positions at the San Diego Yacht Club and Cape Cod Sea Camps. Bryan sails in national and international regattas as well as being an accomplished windsurfer. Bryan graduated from San Diego State University. Jane, Bryan's wife, and daughter, Emily, will join Galatea in Puerto Rico to celebrate Thanksgiving.

Crew Member: Dr. Patricia Schmidt
Patricia Schmidt will be joining the Galatea crew for the Boston to Bermuda to San Juan, Puerto Rico legs of the journey. Patricia is currently a Postdoctoral Fellow at MIT working in the Man Vehicle Laboratory in the Center for Space Research and the Dept. of Aeronautics and Astronautics. She sailed on the MIT varsity sailing team and was the MIT Nautical Club Commodore. She has raced in the US Women's Sailing Championships, competed for the Adams Cup, successfully defended the Olympians' Trophy, the New England Sloop Championship title. Patricia originally hails from Biloxi, Mississippi.