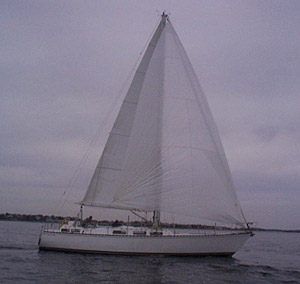 Galatea is a 47 foot (14.4 m) blue water sailboat, from the Mac Vicar yard in British Columbia. This cutter rig is a Kennedy design and built in 1976. Galatea's maiden voyage was a circumnavigation with her first owners. We purchased Galatea from Joe and Lisa, who gave Galatea much love and attention while living aboard from 1992-2000 in Florida and the Caribbean Islands. Galatea is named after a Greek Neried, or sea nymph, daughter of Doris and granddaughter of Poseidon, who protects all those at sea.

Entering Galatea from the cockpit, you enter the galley to port (left), the salon, and the navigation station to starboard (right). Further forward, or fore, you enter the main cabin, where Gui and Dava typically sleep. There is a head (bathroom) in the forepeak (the bow or point of the boat). Walking aft (backward toward the rear of the boat) you past the cooler and freezer located on starboard with the engine, batteries, etc. under the center cockpit. Further aft you enter the guest quarters, main head, and computer and work desk. There is an aft cockpit where you have access to an aft door, which leads to the swimming/diving platform. 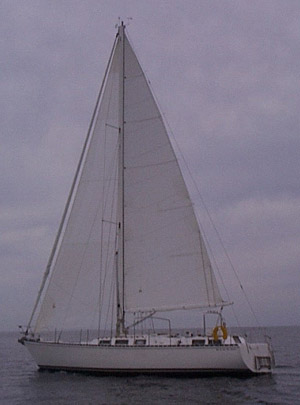